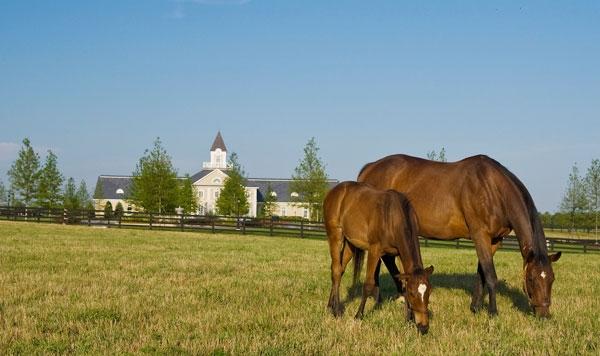 A circuitous journey that had lasted seven years across six states – one that had taken the brave gelding from competing against the best horses in the world to being rescued from a notorious feedlot in California – was finally over.

And not a moment too soon!

In fact, another 24 hours and Racketeer would have been heading for a slaughterhouse in Mexico.

Bred by Adena Springs, Racketeer, a son of Breeders’ Cup Classic winner Awesome Again and out of the stakes-winning mare Noble Robyn, was a war horse on the track. He raced 52 times, earned more than $400,000, and competed in the Hollywood Gold Cup as well as 12 other graded stakes.

Purchased privately by Auerbach in 2008, Racketeer was claimed from her at Del Mar in the summer of 2011 and won a claiming race at Fairplex Park in September. The next time Racketeer is identified is when he’s found in a feedlot frequented by killer buyers earlier this spring.

“We had someone going to the feedlot and they told us there were 10 thoroughbreds there ready to go to slaughter,” said Karin Wagner, CEO and Founder of the California horse rescue organization Neigh Savers. “My agent (Jenny Earhart) negotiated to take all the thoroughbreds and a warm blood off the lot. They were slated to go to Mexico.”

Once the horses were safe, Wagner ran the tattoo numbers and realized one of the thoroughbreds was Racketeer. Adena immediately stepped up to purchase Racketeer and ship him back to Kentucky.

“Like so many of these horses, it’s hard to get the story on why these horses end up in such dire straits,” said Auerbach, chair of CARMA (California Retirement Management Account). “Everyone has a similar story. A horse is given to someone who promises to keep it as a pet or use him or her for this purpose or that purpose and then things change. Sometimes they lose their jobs or they have to move. They get desperate

“The most disheartening thing is these people never get in contact with the people they got the horse from so they have an opportunity to take them back.”

While Wagner admits there are a “lot of bottom feeders” who will take advantage of horses once they leave the track – “It doesn’t matter if they earned $2,000 or $500,000, they could end up in the feedlot if you’re not careful” - she’s also more upbeat about the state of thoroughbred retirement then when she started Neigh Savers in 2006.

“I see a lot more people interested in after care than ever before,” she said. “With the NTRA, Stronach Group and other groups, the public is aware of the effort we’re making to help these horses. I think people feel better about racing because of these efforts. “

Efforts that provide horses like Racketeer and nine others safe and loving homes.